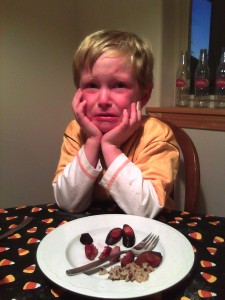 I was thinking about this photo the other day during a relatively peaceful dinner with my kids. I think we were having grilled cheese sandwiches and tomato soup. I snapped this grainy photograph of Luke, then only 4 years old, nearly a year ago during a particularly frustrating episode of what I have dubbed Dinnertime Drama. It was when the idea of a family-life/diabetes blog first blinked into the atmosphere of my creative musings. Surely, I had thought, other families must have similar challenges. Why not share mine? At the very least, writing about moments such as these might help to quell the desperation I sometimes feel as a single parent trying to toe my own line.

Some context–Luke was diagnosed with diabetes just 6 weeks shy of his second birthday. His diet still consisted, in large part, of Cheerios, applesauce, yogurt, noodles, and breastmilk. When he returned home from the hospital several days later with two terrified parents who were just learning how to wield a syringe, there wasn’t much thought as to what he was eating so much as whether he was eating enough to fend off scary middle-of-the-night (or anytime, really) hypoglycemic episodes. The thing about injection therapy is that there’s not much room for finicky toddler food-refusal power plays when you have blood glucose-chomping long-acting insulin on board. And a 25-lb child who didn’t show symptoms of hypoglycemia until he fell into the 30’s. So it often went like this:

“You don’t want to eat that yummy couscous with steamed carrots Mommy made you?

But Mommy just gave you some insulin. Don’t you want to at least try it?

Well, how about some more Cheerios and yogurt then?”

And so it went for two more years. Sure, there were a few more foods he learned to enjoy, but our opportunity to really introduce new foods and easily influence his food choices had passed with the last of his beta cells. Finally, I decided that enough was enough. Luke would no longer get a free pass to eschew unfamiliar or less-kid-“friendly” (more on that subject another time) foods at mealtime. And the time was right; his food intake was getting more predictable, his episodes of hypoglycemia less frequent, less severe, and more obvious, and most importantly he started insulin pump therapy.

The flexibility of pumping allows me to dial down the amount of insulin he receives if, say, he refuses to eat his dinner of sweet potatoes and black beans. So I instituted some new dinnertime expectations. Namely, that everyone would be required to at least try the things on their plates. No one would be served something different than what the whole family ate. And no more routine bedtime snacks. Which brings us back around to the photograph of Luke, above.

I had prepped all the kids beforehand about our new mealtime guidelines. We had talked about the importance of healthy eating and variety, and trying new things. We sang “Party In My Tummy” and did a silly dance. I served up what I thought would be a fairly innocuous meal–pretty cool (I thought) purple carrots from the farmer’s market, wild rice, and chicken apple sausage. No unfamiliar sauces, no foods mixing or otherwise touching each other on the plate, nothing green or leaf-like for this first run.

But my inner resolve began to crumble when he broke into tears at the sight of the foods he was expected to let pass over his lips. Big, pathetic, puppy-dog tears coupled with a Momma-Why-Are-You-Doing-This-Awful-Thing-To-Me expression. The other kids were relieved that this first night of “trying new foods” was actually going to result in a full belly, and were ready to move onto dessert in a flash. Sitting alone at the dinner table intensified Luke’s woefulness and all I could do to cope was to stealthily take a picture with my phone. Hopefully, I thought, I will be able to look back at this photo and see how far we’ve come from this moment.

One of his favorite foods now is the aforementioned tomato soup. He eats some of his sweet potatoes and black beans.  I get a little thrill every time he tries something new and his eyes light up with surprise and relief. One thing that I’ve learned about Luke is that he protests changes loudly and passionately, and then eventually he will acquiesce. He no longer reacts as if I’m trying to poison him when I put vegetables on his plate. And while he still grimaces and follows bites of unfamiliar foods with gulps and gulps of water, he does try things. We have a long way to go before I will proclaim him a “good eater,” but I will voice my ideals and maintain expectations, keep things positive, and continue to persevere. 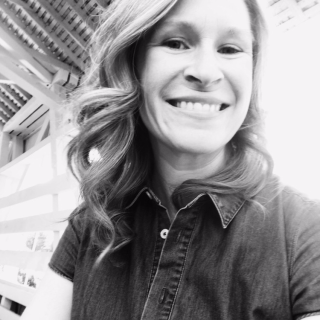